The town of Tours

Leisurely stretching out between the River Loire and the River Cher, with one at its head and the other at its feet, Tours acts like a magnet for visitors. This is a lively city where people know how to enjoy life. Flourishing, joyful and friendly, Tours has the quiet assurance only possible for the heirs of a prestigious history. That's right! Not every city has been the capital of a kingdom. Among the town's attractions is a wonderful location, right at the heart of the region. It is easy for visitors staying for a few days to see the sights all around in Touraine and the Loire Châteaux. 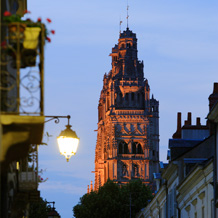 Saint Gatien Cathedral: It took almost four centuries to build today's cathedral, the successor of four churches standing on the same site (from 1170 to 1547)! The towers combine the Romanesque style at their base and the Gothic (for one tower) and Renaissance styles (for the other) in the upper part. Inside there is a wonderful glass wall and roof, made up of 15 stained-glass windows dating from the 13th, 14th and 15th centuries. 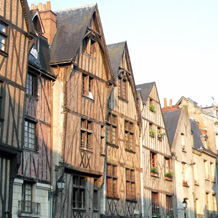 Rue Colbert: it follows the route of the old main road running from east to west in the Gallo-Roman town. During your stroll, you can see some fine half-timbered houses (15th and 16th centuries). Don't hesitate to turn off into the adjacent streets and see an inn dating from the 15th and 16th centuries.

Place Plumereau: the heart of Tours old town! But it was only in the second half of the 19th century that the area became a square. From the first rays of sunshine, the café terraces welcome people out for a stroll, with a chance to sit down and get a good look at the façades. In the centre of the square, a small cemetery was discovered in the 1970s, as well as fragments of Gallo-Roman foundations.

Saint Martin Basilica: The only remains of the mediaeval basilica (11th-13th centuries) are the Charlemagne Tower and the Clock Tower in Rue des Halles. Today's basilica, built in the 19th century, contains the tomb of Saint Martin. Make sure you see the cloister, built in the early 16th century.